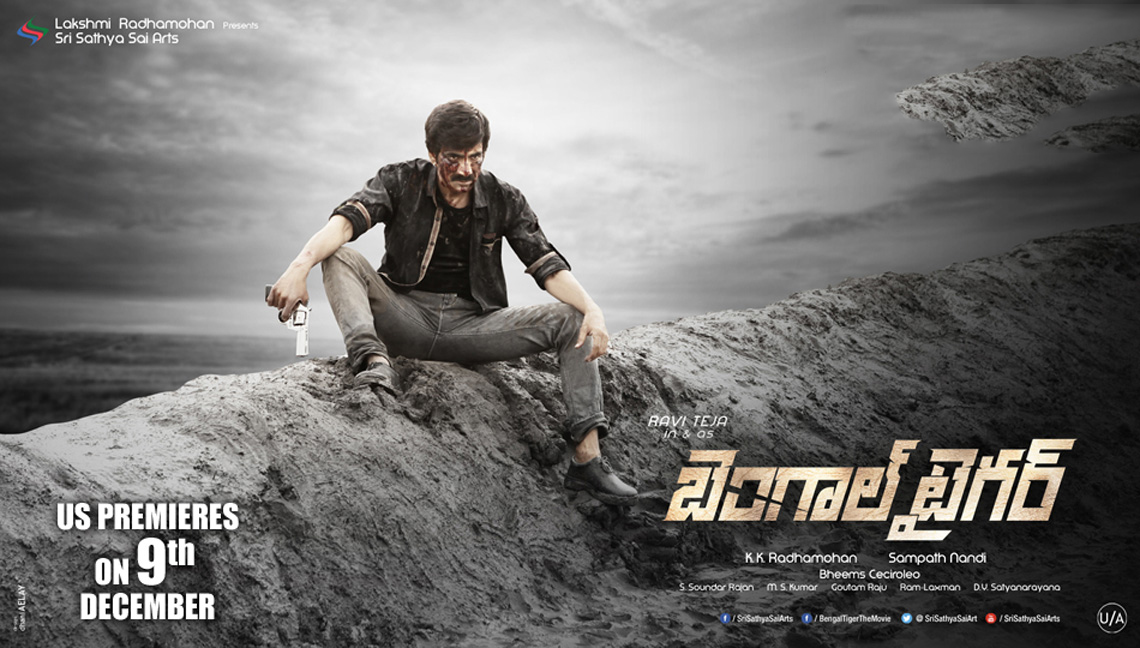 Summary : On the whole, Bengal Tiger is yet another routine commercial entertainer that has come out this week. Raviteja’s sincere performance, a decent first half and an interesting interval bang are basic assets. But a dragged second half, and regular and routine climax spoil the fun. Bengal Tiger is only one time watch film.

Aakash Narayan (Raviteja) hails from a village Atreyapuram in Godavari district. Owing to his marriage issues, he wants to become a celebrity or at least he wants fame by doing something crazy. In that process, he throws stone on a cabinet minister ( Sayaji Shinde) who visits his village for election campaign. Thus Aakash gets media attention and minister’s attention as well and ends up in Jail. But, during the course, realizing Aakash’s smartness, same minister hires him to work in his team.
Later, Home minister Siddhappa (Rao Ramesh) who is looking for a smart bodyguard like person for his family, especially for his daughter( Raashi Khanna) hires Aakash for one time task. Impressed by his work, Home minister offers a position with him, Aakash quits working for the other minister. In a similar fashion, Aakash climbs up the ladder with access to chief minister.In the sudden twist Raashi Khanna, Tamannah both loves Aakash and Aakash plays mind game with both lovely ladies.

What is Aakash’s main motive behind reaching CM Office? Do Tamannah or Raashi Khanna really love Raviteja character or any other mind games involved? How the revenge formula unveils? How Aakash maintained romantic track with both the heroines…That forms the rest of the story.
Plus Points:
Though the film is routine mass entertainer, the director has narrated with some fresh and new ideas. The first half is decent and the second half has the dragging narration.  30 Years Prudhvi steals the show as Future Star Siddappa.
Speaking of performances, Raviteja  carries the entire film on his shoulders and has done his job well. As usual, he is pretty good with his comic timing and fights. Rashi Khanna and Tammanah are yet another major attractions of Bengal Tiger. They are pretty good in their respective roles and Rashi Khanna’s bikini scenes are eye feast to all the front benchers.
Tammanah does a good job and her skin show is feast to her fans.  Comedy quotient in the film has been maintained quite nicely.  Mainly the comedy track between Prudhvi and Posani is rib tickling.  Brahmi is completely wasted in his role. Boman Irani.  Rao Ramesh and Boman Irani do their respective roles well.
Minus Points:
The main disadvantage of the film is its second half and regular climax. The post interval sequences are extended without reason, many of which could have been easily chopped off.
Technical Aspects:
The movie has good production values  and music by Bheems Cecireleo  is yet another asset for the film. Cinematography by Soundararajan is good. The locations chosen and the way they have been showcased is quite good. Dialogues by Sampath Nandi about Powerstar are edgy and evoke good fun.
Verdict:
On the whole, Bengal Tiger is yet another routine commercial entertainer that has come out this week. Raviteja’s sincere performance, a decent first half and an interesting interval bang are basic assets. But a dragged second half, and regular and routine climax spoil the fun. Bengal Tiger is only one time watch film.
Rating: 3/5
2015-12-10
Telugu BOX Office
Previous: Special surprise for NTR fans on New Year
Next: Release date confirmed for Puri’s Rogue