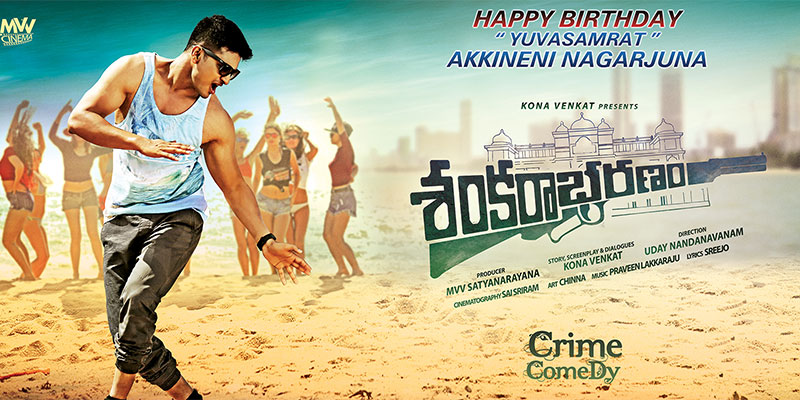 Story:
Shankarabharanam, which is a remake of Bollywood film Phas Gaya Re Obama is a crime comedy thriller movie, which has been penned by ace scriptwriter Kona Venkat. Set in the backdrop of Bihar, the movie revolves around the story of an NRI Gowtam(Nikhil Siddhartha), who visits Bihar to sell his maternal property.
​

In very next scene, Gowtam learns that his father has been cheated by business partners and on the verge of bankruptcy. To recover from the debts, Gowtam’s mother’s idea is to sell her ancestral property which is located in Bihar. Now Gowtam

​ decided to go India to sell​

the Property and get rid of the debts in USA. What are the consequences faced by Gowtam in that process forms the rest of the story..

Artist’s Performances:
Speaking of performances, Nikhil, suits perfectly in the role of NRI. It is quite surprising and impressive to see him perform the way he did. Nikhil had a lot of scope to showcase his talent and he delivers it with a lot of ease. Nanditha and Anjail are good in their respective roles.
Anjali, Sampath Raj, Rao Ramesh, Sapthagiri and Geetha Singh have done justice to their roles. Too many villain gangs been introduced,many of the comedians too. Altogether nothing worked. Comedy quotient in the film has been maintained quite nicely in the first half with Sapthagiri  doing a good job as Nanditha’s lover.
Analysis:
The film has a slow and dragging narration, but few comedy scenes are entertaining. However, the second half is very engaging and 30 Years Prithvi steals the show as Percentage Parmesh.  First half of the film is very engaging, and the way the love story has been weaved into this crime thriller is quite good.
Technical Aspects:
The movie has good production values  and music by  Praveen Lakkaraju is just average. Richard Prasad’s cinematography are the big attractions in the technical front. Dialogues by Kona Venkat  are edgy and evoke good fun. Screenplay is also very impressive as some cleverly packaged scenes are placed in right areas.
Verdict:
On the whole, Shankarabharanam has some decent moments. Nikhil’s performance, interesting story and entertaining first half are major assets of this film. One time watch crime comedy thriller.
Rating: 2.75/5
Review: Shankarabharanam – Decent thriller
Director : Uday Nandanavanam Producer: M.V.V. Sathyanarayana Cast : Nikhil Siddharth, Nanditha Raj, Anjali Story-Screenplay-Dialogues : Kona Venkat Music : Praveen Lakkaraju Presented by : Kona Venkat Banner : MVV Cinema Release : 4th December, 2015 Young hero Nikhil is going great guns in his career. His is now back with his latest release Shankarabharanam. Starring Nikhil and Nanidtha, this film has hit the screens today. Let’s see how it is.   Story:    Shankarabharanam, which is a remake of Bollywood film Phas Gaya Re Obama is a crime comedy thriller movie, which has been penned by ace scriptwriter Kona Venkat. Set&hellip;

Summary : On the whole, Shankarabharanam has some decent moments. Nikhil’s performance, interesting story and entertaining first half are major assets of this film. One time watch crime comedy thriller.